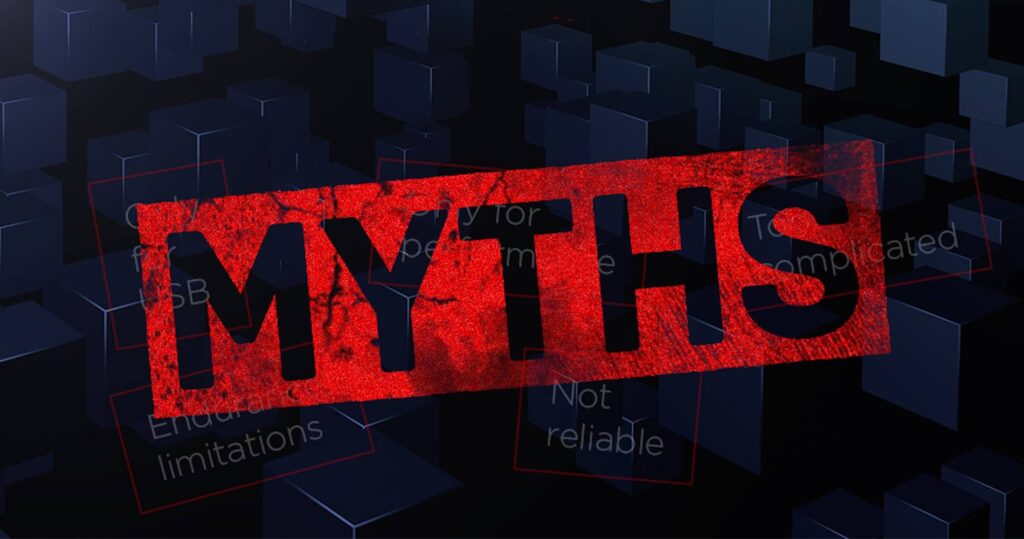 For years, storage has been viewed as the important but slightly boring cousin to processing power and applications. With the onslaught of performance and value brought into the fold by enterprise NAND devices the situation has changed drastically. We now have technology to alleviate storage bottlenecks that have plagued the industry for years.

For this to happen, we as an industry have to identify where persistent media works and where it doesn’t. Frequently, flash isn’t considered for some storage solutions due to incorrect assumptions or subtle undiscovered values of the media not being known.

[Tweet “Get the truth on #flash #storage – 5 most common myths”]

I’ve already written about several misconceptions about flash, and in this blog I plan to tackle its most common myths. Let’s see if we can eliminate the 5 biggest myths that are preventing you from taking advantage of flash based devices and systems.

1. Flash is OK for USB keys and maybe consumer devices like laptops, but I can’t trust it with my enterprise data.

USB key design is completely different from consumer SSDs for laptops, and those are different from enterprise-grade drives. All are designed to meet certain needs and use cases, both in respect to capacity and performance. Enterprise flash devices have been engineered with unprecedented reliability, end to end protection, temperature throttling technology, and groundbreaking Quality of Service (QoS). In fact, they are far more reliable and offers greater performance than the HDDs our industry has relied on for years! In a recent blog, I looked at the five key elements that set SanDisk enterprise SSDs apart – read it here.

2. I can’t use flash because of endurance limitations

In the early days of enterprise flash usage, most everyone was using SLC-based devices. SLC devices are based on single-level cell structure and have the ability to write the entire flash capacity 25 to 50 times per day for five years due to cell design margin compared to cells capable of multiple bits per cell technology. This limitation was due to a concern with flash endurance, based on a general lack of knowledge or understanding of the industry workloads.

When we as an industry became aware of the endurance limitations of flash, large amounts of write margin were added to the specification for devices that forced the use of SLC, which is a very expensive solution. In an effort to move to a lower cost point and larger capacity per device, SanDisk developed methods grown from our vertical knowledge base to produce MLC-based (multi-level cell) devices capable of servicing the enterprise industry. This capability has a foundation in the fact that we design our own flash cells, in a copartnered fabrication site. This fabrication site produces almost half of all NAND used in the world per year. Understanding every aspect of the media in a way that only a wafer producer could, we produce devices that can meet enterprise needs of 45 device write fills per day for five years, down to cost-sensitive solutions that meet the need of .5 device write fills per day for five years.

The vast majority of customers have gotten more sophisticated in understanding their own workloads and we see that most enterprise workloads now fall in the 3 or less write fills per day for 5 years space. In any event, we supply much greater endurance needs then all but the most radical workloads would call for.

3. I only need to consider flash if I need to boost my performance radically

Flash, of course, has become a mainstay in solutions that need additional performance. In some cases flash is used as a cache to accelerate back-end storage comprised of slower HDDs. In other cases HDD storage pools have been replaced by flash all together, or a flash tier is added in front of the HDDs. While the use of flash as a performance tool has become understood and accepted, all too often you might not look at flash as an option because you can get the performance needed with HDDs.

But flash can be used to provide so much more than performance! It can change your entire architecture with consolidation and reliability, and save you incredible costs. Because this is such an important element of the grandiose misunderstandings about what flash can do for the data center, I dedicated an entire blog to this topic, which you can find here.

4. Flash is a new technology and more likely to fail than my trusted and mature HDD solutions

This is a quick one to dissect. There exist a number of reports in the industry stating measured AFR for SSDs and for HDDs. SSDs are the clear favorite in annual failure rate. SSDs also have a much better uncorrectable bit error rate than HDDs. All you have to do is look at the device specifications to see this. In addition, SSDs have no moving parts so they aren’t susceptible to mechanical failure or vibration problems.

Anyone reading this who has worked in a server development lab has at one time or another pushed a cart full of HDDs around the lab on a bed of antistatic foam, ever so gently slipping over carpet or door ledges fearing damage to a hard drive head. Of course, extra work has to be done in the server to ensure the drive’s spinning vibration doesn’t interfere with its HDD neighbor. SSDs have no such issue with minor vibration (affected by it or introducing it). Provided you don’t shake them so hard you break a component off or cause a pin issue, by which any and all electronics could be damaged as a result – you will be fine with SSDs!

5. Flash is more complicated to use than HDDs

SSDs are built around the same protocols as HDDS. You can simply buy a SATA SSD or a SAS SSD, plug them in and they look like a block device, just the same as the HDD. The only difference is that the SSD can actually take advantage of more of the bandwidth offered by a 6 Gb/s link or a 12 Gb/s link. HDDs can’t even saturate a 3 Gb/s link.

In the event you chose to use a PCIe solution like a Fusion ioMemory flash device, you can simply plug the device in, load the latest driver, and you get a block device that behaves and looks just like a hard disk drive block device. HDDs typically require a storage HBA and a driver, so this is essentially the same level of complexity as installing a PCIe flash solution. It is true that SSDs have endurance limitations, but if you buy the right endurance level device for the application at hand, the device will last the full length of the warranty and expected life of the solution. If a user wants to keep track of the endurance used, or “% of life left” of the device, SanDisk devices provide you the specific register locations to allow the user access to monitor the information. Accessing these registers is no different or more difficult than how the industry currently accesses PFA registers and failure registers in HDD solutions. In the case of the Fusion ioMemory solution, the management tools provide the current endurance levels as part of the current status. As a general rule, SSDs utilize the same protocols, management methods, and hardware paths that current HDD solutions do. And as you’ll likely consolidate your hardware, managing less infrastructure will make it easier than before!

The use cases for flash-based devices continue to grow at an astounding rate. More and more users are becoming aware of the useful nature of the media and how solutions can be built that are equivalent, or even much better, than HDD solutions. Flash is moving beyond top-tier performance solutions to storage tiers with more moderate performance needs. Not understanding how flash can benefit your business may be hampering your success in the market. So get the facts on flash!