The Internet of Moving Things 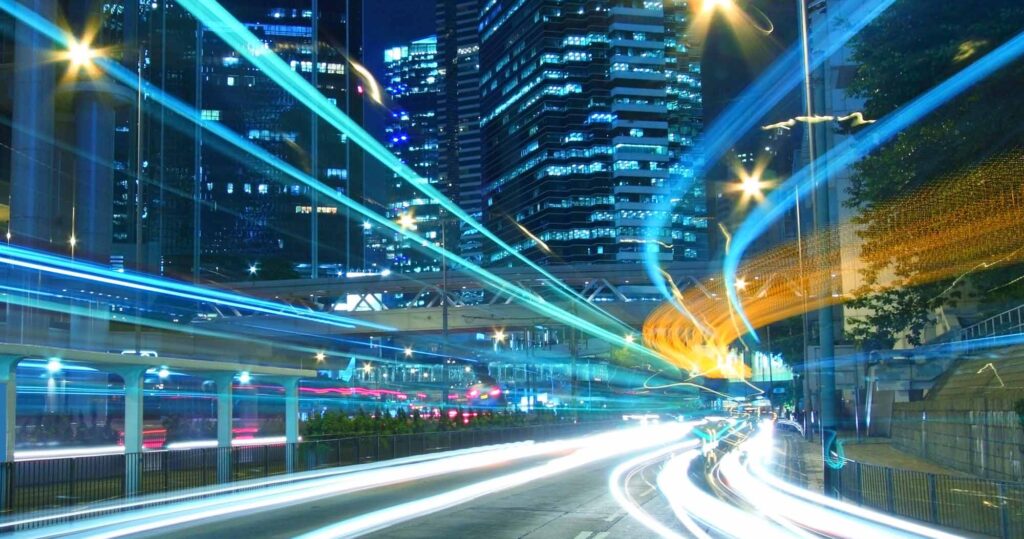 Mobile technology isn’t just in your pocket 24/7. It’s everywhere around us today, with its continual byproduct —data— trailing us everywhere we go. The great nexus of this 21st-century trend isn’t really your smartphone—it’s the city where you live, work, and play. Over half of the world’s population lives in urban areas, which are expected to grow to accommodate an additional 2.5 billion people over the next three decades.

While critics argue that 24/7 devotion to our devices can drive us apart, others point to how myriad streams of emerging data culled from every moving (and connected) thing pulsating through our cities—cars, buses, bicycles and more—can ultimately reshape and optimize our urban areas to make them better places to live.

That presents urban leaders today with enormous challenges, but also big opportunities to tap into the mobile-technology boom to improve everything from city services to cleaner air—and offer new insights into public safety and long-term urban planning.

[TWEET “How is moving data helping to build the #smartcities of tomorrow? #internetofmovingthings @veniamworks”]

A handful of critical technologies—specifically, the ability to move massive amounts of real-time mobile data between the dynamic urban world and the cloud—are key building blocks of that future. Veniam’s unique mobile-data platform, built for a future based on autonomous vehicles (AVs) and an emerging “Internet of Moving Things,” brings three essential enablers to this vision of truly smart cities:

What are some of the blue-sky possibilities with new mobile infrastructure in place? Here’s a look at some of the most promising:

Experts speculate that early iterations of autonomous cars will hit the road by 2020. The impact on safety is one of the great promises of autonomous technology: A recent study by the Eno Center for Transportation predicts that when we reach the point where 90 percent of cars in the U.S. are autonomous, the number of accidents will fall from 6 million a year to about 1.3 million. The enabler of this long-term vision: data. Fully-realized AVs will rely on a variety of cameras, sensors and radar to operate safely and will generate roughly 4 terabytes of data in a typical day of driving. Storage plays a critical role in the cars of the future to manage data systems such as AV mapping and navigation, infotainment, telematics, accident/drive recorders, digital clusters, V2V/V2I, ADAS and more.

The rise of autonomous vehicles is also expected to lead to a dramatically lighter load on city streets. Ridesharing is already an innovative and competitive multi-billion-dollar industry, but experts predict that the rise of ridesharing with AVs and will mark another step away from automobile ownership in dense metropolitan areas, and less cars on the road. The AVs that do brave the commute, meanwhile, will all be gathering real-time data about traffic and congestion and cutting down on human habits that lead to stop-and-go traffic jams. A recent study from the University of Illinois at Urbana-Champaign, for example, showed that the presence of just one autonomous car reduces the standard deviation in speed of all the cars in a traffic jam by nearly 50 percent, and dramatically cuts down on the number of sharp hits to the brakes.

Allocating space for parking is an essential but expensive part of doing business in big cities. Roughly 31 percent of the space in the central business districts of 41 major cities is currently dedicated to parking, and a study by the Sightline Institute estimated that developers’ costs for parking increase average rent prices by $225 nationwide. But data-driven autonomous vehicles will shift those numbers dramatically. A professor of transportation engineering at the University of Texas-Austin recently theorized that if you shifted an entire city to autonomous cars, it would need 90 percent less parking space than it needs today, and global consulting firm McKinsey and Company has speculated that more AVs could open up 61 billion square feet of urban space we’re currently using for parking spaces. Now imagine all that room opened up for developments like libraries, museums or even green space.

Studies have already shown that autonomous vehicles and fewer cars on the road will cut down on CO2 emissions, but there are other ways cities can take advantage of mobile data to clear up the air.  Some cities have already begun to implement mobile sensors attached to devices or objects that move throughout a city, and the information gleaned has been stunning. The Environmental Defense Fund has used data from vehicles to create methane maps and identify more than 5,500 leaks in U.S. cities, while a leading Internet mapping company has equipped its mapping and imaging vehicles with an environmental intelligence platform with sensors monitoring particulate matter, NO2, CO2, black carbon, and more.

We already know the benefits of a society increasingly logged on and driven by data.

It shapes how we work, who we meet, and how we build our communities. But as our dependence on mobile data increases, how we push our cities forward into the future and make them better places to live will hinge on how we harness the information available all around us.

Western Digital thanks Veniam for contributing this blog about the importance of data in the future of autonomous vehicles and smart cities. As Western Digital’s NAND Flash storage captures, stores and analyzes data both in autonomous cars and in the cloud, Veniam’s platform for connected mesh vehicles moves massive amounts of data for future mobility services.

Whether it’s stored in the car or sent to the cloud for historical analysis, data is what enables autonomous vehicles to have safe and reliable operations. And that in turn plays a huge role in the Smart Cities of tomorrow.