Who Makes the World’s Best Smartphone For Shooting Pictures? It Depends When You Ask 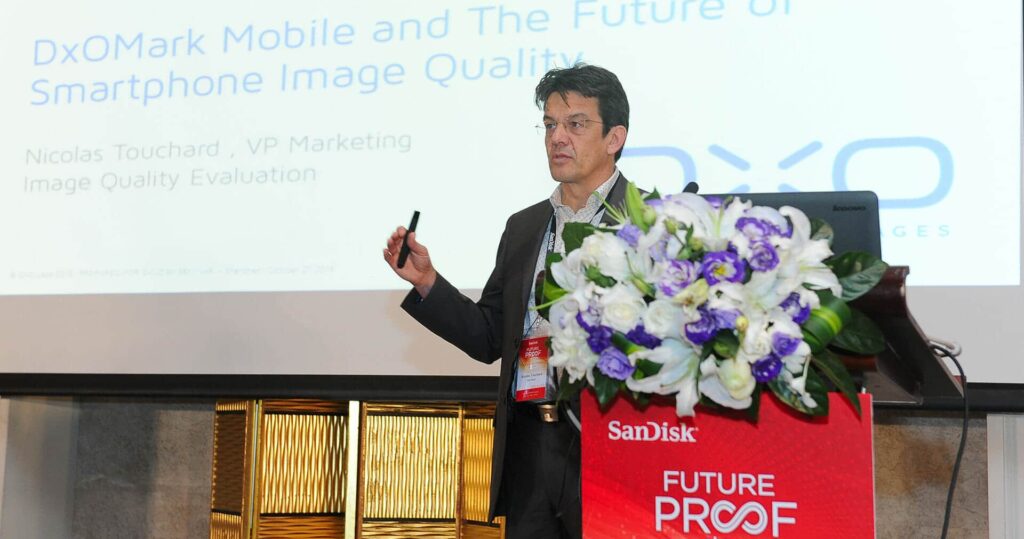 The Sony Xperia Z5 is highest rated camera for photo and video quality.

Nicolas Touchard, vice president of marketing and product management at DxO, gave attendees of Future Proof Storage an overview of DxOMark Mobile, the company’s innovative suite of benchmarks for rating video and picture quality on smartphones.

If you’re not familiar with the benchmark, you need to start doing your homework. DxoMark gets approximately 750,000 to 1 million unique visitors a month and grew by 25% last year. Multiple reviewer sites use its tests for product reviews. With consumers gravitating more and more to taking pictures with their phones, image quality will become even more an important factor in winning (or losing) market share. (DxO has also created a performance-level add-on camera for iPhones and iPads.)

Unlike most other benchmarks, imaging benchmarks combine objective and subjective factors, Touchard notes. DxO examines measurable attributes such as response time, but you also have to take into account more subjective perceptions, such as texture and color. As a result, DxO tests the cameras in its labs and real world situations. It then issues a cumulative, single-number score. Overall, DxO has benchmarked around 40 phones.

There is also no single secret formula for creating a great mobile camera. Some factors, like storage capacity and speed, will invariably always have a direct and important impact on performance. Speed is extremely important for slow-motion: without fast memory, cameras drop frames and can’t deliver a true slo-mo experience.

The interplay of the different components and subsystems, however, can change from camera to camera. Signal processing, for instance, can impact color, contrast and autofocus, among other factors. Lens design and shutter, meanwhile, affect some of these, but also others like exposure that signal processing doesn’t really change. Forget the size of smartphone cameras: they are complex systems that just happen to be small.

“Hardware and software has a significant influence on image quality,” he said.

And the best part? We’re nowhere near the limits. A few years ago, the HTC 8X topped the ranking with a cumulative score of 67. The HTC 9 then knocked it off with a 69. Since then, Apple, Nokia, LG, Motorola, Samsung and others have continued to edge each other out thanks to processor advances, new lenses and faster memory. The Sony Z5 has a score of 87 followed by Samsung’s Galaxy X6 with 86. (The iPhone 6 has an 82). The LG V10 has yet to be rated. Computational photography and RAW shooting will further raise photo quality.

“Every generation they (critics) say there is a limit. ‘You will never get higher resolution,’ they say. But there is a progression,” he said. “We’re not at the threshold yet.”