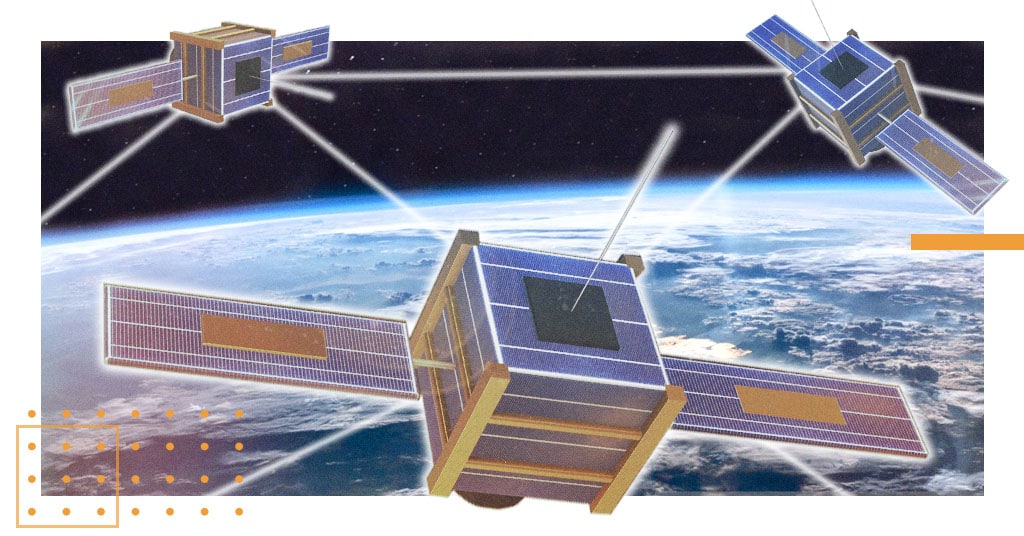 This is part two of a three-part series about data storage in the new space age. Design by Aisha Alkinaey.

Satellites are having a Moore’s Law moment. Instead of hugely complex and absurdly expensive missions, like the 25-year and $10 billion (and counting) James Webb Space Telescope, there’s a move to lower-cost satellites that are no bigger than a pair of shoes. Some can even fit in the palm of a hand.

The miniaturization of satellites is no small revolution. It brings down the high barrier of space. What was once a field for government agencies is now accessible for commercial players and novel applications.

Clearly, small satellites (or “smallsats”) are never going to replace something as wonderous as the Webb telescope. However, they are finding innovative new ways to explore and capitalize on space. All by rethinking the satellite and its data systems.

Smallsats are a loose term for any satellite under 1,000 pounds. But it’s not just mass that differentiates smallsats from their towering counterparts, it’s the philosophy behind them.

Smallsats are intended for fast iteration and constant improvement, much like the agile principles that swept software development. Smallsats can be built in a lab, a garage, or a classroom. They can even be mass produced.

Some smallsats are launched on-demand using micro-rockets, others hitch a ride on a larger mission, or can be sent to orbit in batches. A record 143 satellites launched on a single rocket earlier this year.

Once in orbit, dozens, hundreds, and potentially thousands of satellites can form a “constellation” where they work in concert on a single task, like imaging our planet in real time or beaming internet to rural areas.

Upcoming use cases range from deep space exploration, to a space-based data center, and even a space ad billboard (no joke). And as DIY smallsat kits, cheap launching mechanisms, and share-a-ride to orbit concepts mature, the sky will be no limit for anyone who wants a piece of the space data revolution.

Rafał Graczyk is a scientist and engineer working at the heart of the satellite evolution. Over his career, Graczyk has been involved in several satellite launches, including the YES2 Satellite, a tethering satellite 32 kilometers long—the longest humanmade structure in space.

While YES2 was successful as a scientific experiment, it saw several electrical faults that jeopardized the mission. “Space is hostile; it’s hard to survive whether you’re human or machine,” said Graczyk.

Space is a harsh operating environment, to put it mildly. Graczyk explained how electronic components take a violent mechanical beating during takeoff. And once in orbit, materials endure extreme stress from thermal changes (a satellite orbiting Earth can cycle through 260 degrees Fahrenheit every hour of every day).

Space radiation will degrade components until they are inoperable. Ionizing particles can practically punch a short-circuiting hole in a microchip. And there are plenty of strange phenomena that occur to materials in space’s deep vacuum (tin whiskers, anyone?).

“It’s not a question if components will fail,” said Graczyk. “But rather how to mitigate those faults, keep operations reliable, and in the worst case, recover a system that has no power button,” he said.

Today, Graczyk works as a research scientist at SnT, Interdisciplinary Centre for Security, Reliability and Trust at the University of Luxembourg. He researches new architectures that can make computing systems more resilient in space.

Traditionally, the space industry has relied on what’s called “rad-hard silicon,” radiation-hardened components that have been designed, tested, and verified to perform under the extreme operating conditions in space.

But the process of qualifying such components is painstakingly long. According to Graczyk, the fastidious process makes the latest smartphone 100 times faster than current space-deployed technology. “It’s an essential problem with space-qualified electronics,” said Graczyk. “You’re always sacrificing performance for the sake of reliability.”

Engineers like Graczyk are exploring a different approach. Instead of using space-qualified technologies,Graczyk is taking advantage of the latest, super performant “off-the-shelf” components. He believes the added performance can be used to build system resilience through software mechanisms rather than traditional (radiation hardened) hardware ones.

As the director of IoT and Edge segment at Western Digital, Yaniv Iarovici sees the rush of smallsats to space. He is helping companies choose the right “off-the-shelf” data storage technology for smallsat design.

Satellite applications all come down to data management: capturing, storing, and transmitting data without loss or corruption.  It’s no surprise Iarovici said that storage reliability is the most significant challenge.

For Iarovici, the effects of space radiation and ionizing particles on memory bits are of particular concern. “We put a lot of engineering effort into this area of technology leadership–how to design a flash system to efficiently withstand transient bitflips caused by cosmic rays,” he said.

But designing smallsat systems comes with other distinct considerations. Iarovici said smallsat use cases are still emerging. Systems need to be designed with enough NAND flash endurance and capacity to handle applications that may unfold only a year or two after launch.

The extra capacity can also be used in other ways. Since NAND flash has a finite number of read and write cycles, higher capacity gives headroom for failure or wear. Similar to Graczyk’s philosophy, it’s a simpler approach to increasing storage lifetime.

But Iarovici warns from using just any off-the-shelf flash. “Flash is not just flash,” he said. “Flash is malleable and can harbor different characteristics that will ultimately affect data retention, performance, and endurance. You need to pick the right grade for space.”

The goldrush to orbit

There’s a goldrush to Earth’s low orbit led by the smallsat revolution. A tsunami of opportunities is amassing as cloud computing behemoths quietly and strategically enter space’s ecosystem.

As more satellites and applications head into our atmosphere, more organizations will be asking themselves, “What can I do with data from space?” Nothing, if you don’t have resilient data systems and reliable data storage.