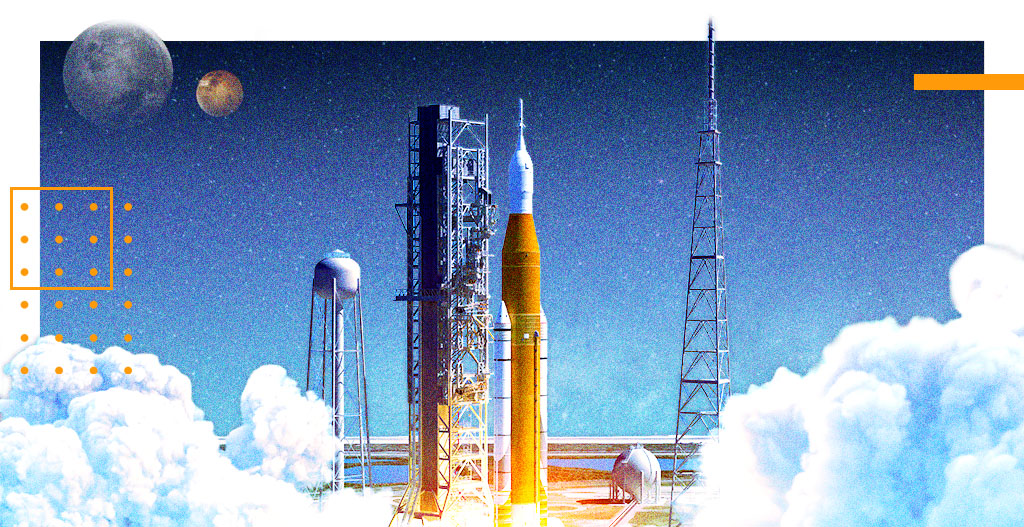 This is part one of a three-part series about data storage in the new space age. Design by Aisha Alkinaey.

Space is austere. It’s an airless vacuum. Temperatures can swing from hundreds of degrees near the sun to so cold that atomic motion slows to a crawl. For engineers and scientists designing satellites and other spacecraft, “keeping it operating as long as possible” is often the most significant challenge after surviving launch.

Rafał Graczyk is a research scientist at the SnT, Interdisciplinary Centre for Security, Reliability, and Trust, at the University of Luxembourg. His career is packed with space-related projects, including the YES2 Satellite, a tethering satellite 32 kilometers long — the longest humanmade structure put in space.

While Graczyk could fill a semester’s course listing the challenges of operating Earth-based electronics in space, there are a few that stand out: the mechanical stress on materials from the violent ascent; the stress of rapid temperature fluctuation in orbit; dissipating heat in deep vacuum (where convection doesn’t work); and non-Earthly phenomena like atomic oxygen, rapid outgassing, and most notably, space radiation.

Space radiation is the most significant hurdle for human space travel because its effects are so detrimental. The term “space radiation” generally refers to ionizing radiation or “cosmic rays.”

Cosmic rays are not quite rays as the name suggests. Instead, they are charged subatomic particles that carry enough energy to knock electrons out of their atomic orbit, causing it to have an electrical charge (ionize).

Most ionizing particles come spewing from the sun either through a constant stream known as solar winds or from sporadic, giant explosions called coronal mass ejections. These outbursts can release as much energy as thousands of nuclear bombs detonating at once, which is why their radiation effect is so damaging.

Yet, the most dangerous kind of space radiation is a galactic cosmic ray.

Galactic cosmic rays are particles that carry massive amounts of energy. They zoom at near lightspeed from supernovas, forming stars, or supermassive black holes outside our galaxy. But the truth is that scientists aren’t quite sure what kicks these particles so hard to make them travel so far and so fast.

While shielding techniques can help protect humans and electronics from much of the sun’s radiation, galactic cosmic rays can zip through anything – human skin, spacecraft walls, or silicon chips. As these charged particles dart through and collide with matter, they can disrupt the delicate balance of electrons inside devices and semiconductor circuitry.

“Those physical effects from billions of miles away play God’s dice with electronics. They can turn processor registers into random number generators,’” said Graczyk.

Unsurprisingly, cosmic rays have managed to cause erroneous mayhem like turning on the fire alarm on a space capsule or cutting communications aboard the International Space Station.

For memory technologies like RAM and NAND flash, a cosmic ray can cause bitflips. A bitflip is when single or multiple bits lose their intended data state, changing from a 0 into a 1 or vice versa. Just one flipped bit can render a dataset unusable.

Few people in the world have the knowledge of both NAND flash manufacturing and product design processes as Raya Kozlov. She is the director of customer quality at Western Digital and a world expert in establishing the quality and reliability of flash-based products, including those headed for space.

“Transient bitflips are a known phenomenon and have been a concern for the industry, particularly for the automotive market,” she said. That’s because, in 2009, cosmic rays were the likely culprit of a ‘sticky’ pedal event and a nine million car recall that followed.

Kozlov said there are new ways to protect flash from the havoc of cosmic rays. “The fact that we [Western Digital] design and build the NAND and the flash controller allows us to leverage synergies of hardware and algorithm-based error detection and correction,” she said.

The flash controller is the powerful ‘brain’ that manages a flash chip, but it uses SRAM memory, making it, too, vulnerable to cosmic rays. “Today, Western Digital is the only company to offer hardware-based bitflip protection of embedded SRAM for both e.MMC and UFS types of flash storage,” said Kozlov.

Space systems are notoriously complex. Engineers try to induce any possible failure by testing subsystems and components mechanically, thermally, and in vacuum environments. Recreating the environment of space can expose any material instability or flaws.

“Quality is fundamental,” said Graczyk. “Even within the same manufacturing facility, batches can be marginally different. We need to know that what we send to space will behave identically to the component we tested on Earth.”

“Every detail matters,” said Yaniv Iarovici. At Western Digital, Iarovici is director of IoT and Edge segment marketing, including space and low Earth orbit. “How we [Western Digital] approach wafer fabrication, supply chain, and engineering from the NAND cell to the controller, firmware, all the way to device packaging and final testing is fundamental to that greater goal,” he said.

Iarovici said success comes down to meticulous engineering.  “Even if companies design with a zero-defect strategy, like in automotive and space-related devices, the scientific probability is never actually zero. It comes down to [Western Digital] methodologies to assure quality and reliability through appropriate design and testing considerations,” he said.

With private companies and billionaire-funded flights entering the field, space launches are now a regular occurrence. Yet withstanding the precarious existence of the cosmos will take much more than just rocket science. As more missions blast off our planet, more reliable memories and storage will be needed to keep data from fudging in space.