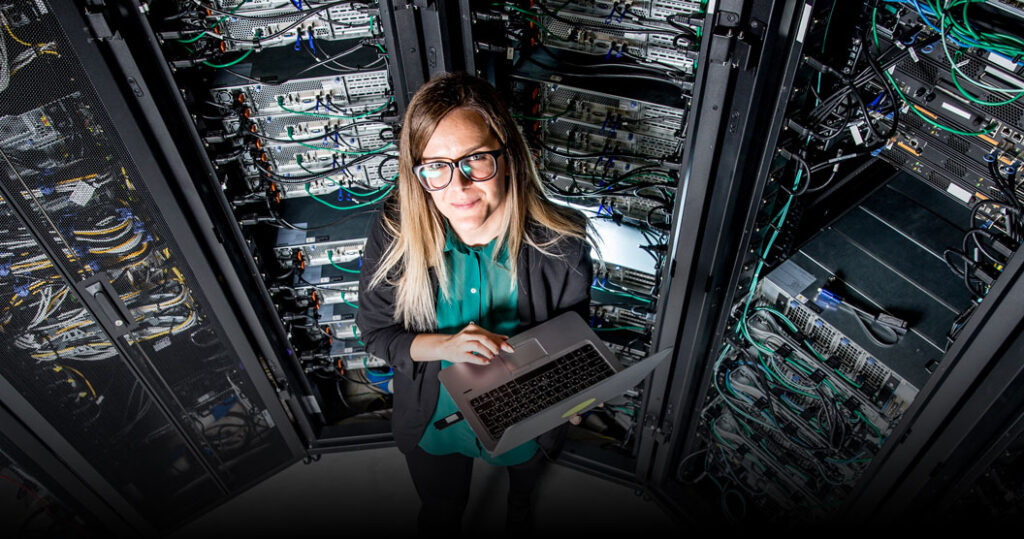 Caution! This blog post is a thought exercise, pulling together information from a variety of sources. Performance is projected based on datasheets. We have not tested this configuration to validate the projected performance levels.

Consolidating several or many SQL Server workloads onto fewer hosts has been going on for years, with workload density per host increasing as servers and storage have become more capable.

Imagine the next wave of SQL Server OLTP consolidation in your company, to run more workloads on fewer hosts than you use today. That’s easy to imagine today, with SQL Server 2008/R2 reaching End of Support on July 9, 2019 – a large percentage of SQL Server deployments run SQL Server 2008, and something will have to be done with them.

From experience you know that when you add more virtualized applications to the server, the server quickly hits a storage performance bottleneck that effectively limits the number of workloads that server can support. This is caused by the I/O Blender Effect which I wrote about in an earlier post of this series.

How to plan and deploy the Storage Spaces Direct storage environment for a successful SQL Server OLTP consolidation project is the focus of this blog post.

Let’s analyze a production-ready configuration that follow’s Microsoft’s guidance, instead of the test configuration described in my previous blog post. I’ll use Ultrastar® SSDs as examples so we can look at specific device characteristics and consider trade-offs. (All figures are from Ultrastar datasheets when this blog post was published.)

The “hyperconverged” configuration means the workloads run on the same servers that implement Storage Spaces Direct, a very popular configuration.

Microsoft requires at least two cache drives per node for resilience, so if one fails, the other can carry the load until a replacement drive is installed. Microsoft’s guidance is to add capacity drives in multiples of the number of cache tier drives, so the minimum is four capacity drives.

Across our 4-node cluster, the eight NVMe SSDs can deliver up to a combined 1,600,000 4KB write IOPS, and even using the smallest-capacity 800GB drive, we get 6.4TB of cache tier capacity.

To get more bandwidth, you can add more SSDs – each SSD has a controller, and the performance of the controller can be one of the limiting factor for bandwidth. Getting more SSDs will give you more controllers and increase bandwidth.

Using more SSDs – but at lower capacity points – can give you more controllers and bandwidth, as shown in the table below.

More SSDs at lower capacity points can give you more bandwidth

You can see how additional lower-capacity drives – thus more controllers – is how you’d adjust this configuration to provide more bandwidth, if you needed it.

Comparing the cost with a national online seller, the four smaller drives cost about +28% more than the two larger drives, but you get 2X the max bandwidth.

Before we order those NVMe drives, let’s consider the “working set”. Each workload has a set of active data that is frequently accessed, and that workload’s performance depends on whether that active data can be accessed quickly.

For a single database, consider the portion of that workload’s active data that’s been recently modified. The modified data has been written to the NVMe drives of the caching tier, and at some point Storage Spaces Direct will destage it to the SAS SSDs.

Before destaging occurs, the workload may need SQL Server to read that data back into system memory; after all, we’re talking about the workload’s most active data. Before destaging, that data can be read from the NVMe cache tier devices, which are over 50% faster (bandwidth) than the SAS SSDs in the capacity tier.

To support the many OLTP workloads you want to consolidate, for best results your system needs to provide enough NVMe drive capacity in your caching tier to hold the most active data of all those workloads.

Our Storage Spaces Direct cluster has 6.4TB of NVMe cache, but our workloads need only 800GB – what do we do?

A couple years ago, a SanDisk whitepaper demonstrated that storage performance was typically the bottleneck that limited how many workloads a host can support. That whitepaper also showed that using fast flash storage in the host not only allowed you to run up to 3x more virtualized workloads on the same host, those workloads would all run 2x faster.

SQL Server and Windows Server are now licensed per-core, so the more workloads you can run on each host, the less you pay for licenses. You minimize what you pay for software licenses when you maximize the work done by each host.

That whitepaper demonstrated that investing in fast flash storage enabled the same host to run 3x more workloads. Three times more workloads per host means you can avoid buying two additional hosts to run those workloads – that can save several $100Ks in software licensing cost, with a 22x ROI.

Returning to our caching tier sizing discussion, let’s increase the number of workloads to be consolidated by 3x, as the SanDisk study showed. That means we’ll consolidate thirty OLTP workloads instead of ten. The total database size will be 12,000GB (400GB * 30 = 12,000GB), and a 20% working set will be 2,400GB or 2.4TB.

With 6.4TB of cache tier across the 4-node cluster, that leaves plenty of cache capacity to consolidate even more workloads, or workloads with substantially larger working sets

Caution! This blog post is a thought exercise, we have not tested this configuration to validate the projected performance levels.

Up Next – the Capacity Tier

In my next blog look at what you need to know about the Storage Spaces Direct capacity tier, destaging and reserve capacity, to make your SQL Server OLTP Consolidation a success. Here are some helpful resources you can take advantage of in the meantime:

Thanks to Peter Plamondon for all of his wonderful work and his many contributions to this and other articles.